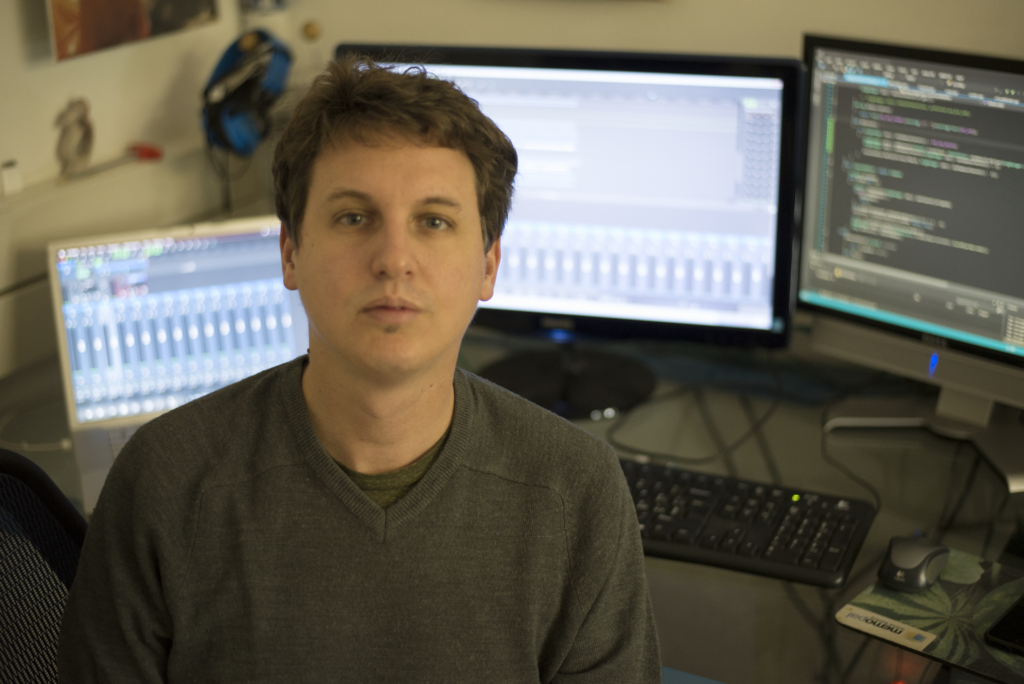 Marco Bertola (Milan, 1983) obtained his Bachelor degree in Computer Science Engineering in 2007 at Roma Tre University. He proposed a dissertation entitled “The measuring of the broadcasting audio loudness” under the supervision of Dott. Mauro Falcone and Eng. Andrea Paoloni. This work was developed during an internship at the Fondazione Ugo Bordoni, a Cultural and Research Institution supervised by the Italian Ministry of Economic Development.

In 2009 he obtained his Master degree in “Sound Engineering” at Tor Vergata University in Rome. He presented a dissertation work entitled “iPad application development for real-time gesture recognition and following” that has been developed during an internship of six months at the the Realtime Music Interaction Department of the IRCAM Centre Pompidou in Paris, under the supervision of Dott. Bruno Zamborlin and Dott. Frederic Bevilacqua.

Afterwards, he performed many other important working experiences, including one internship at the Production Department of RAI, the Italian national public broadcasting company, and one at Telecom Italia, the Italian telecommunications company, where he was working as Project Manager of the Inventory Reporting and Planning (IRP) project.

In 2011 he started focusing his interests on the audio and software engineering field, becoming a software engineer at the n-Track Software, a music tech company of musicians and engineers founded in 1995 by Ing. Flavio Antonioli. Among all, his main area of contribution regards audio software applications created for all major mobile and desktop platforms.

At the end of the same year, he became Adjunct Professor and Master Coordinator of the Master MIS Program at the Electronic Department of Tor Vergata University. He is helding classes in audio and music technologies, directly planning and supervising all the educational activities and the research projects.

In 2015, he took part as audio and software engineer in the launch of a brand new startup for collaborative music creation, Songtree, a spin-off of the n-Track Software. He also collaborated for the achievement of the first seed investment obtained from the Lazio Region.

In 2016, working as software engineer, he contributed to the development of the Augmented MIDI Controller app by Fuzone, an Italian company specialized on DSP solutions.

At the beginning of 2017, together with Lorenzo Brusci, Simone Conforti and Valentijn Borghuis he founded Musica combinatoria (Musi-co), an international startup focused on combinatorial music generation technologies designed to generate real time musical patterns taking the advantages of the new paradigms of the A.I. Specifically, he is helding the position of head of research and development.

In the middle of 2017, he joined the Plants Play project, an Italian startup aimed to apply sensor and music technologies to vegetable ecosystems. He covers the role of head of audio and mobile engineering.

Being truly passionate toward interactive media arts, in the same year he founded the Seeinteracting project, a collective project including musicians, dancers, engineers and architects focused on the application of interactive audio technologies to performing arts and cultural spaces.

In 2016 Folies de Seeinteracting, a performance combining a cello, two dancers and interactive live electronics, was commissioned by the Filarmonica Umbra for the International Performing Arts Festival in Terni. The project was selected as one of the top 20 performance of 2016 by the Lazio Region together with the framework of “Lazio Creativo” program, being included in the book “100 Stories of creativity”.

He is currently working as a Siri Language Engineer (IC) since April 2018. His interest is now particularly focused on Natural Language Understanding, Speech Technologies, and Machine Learning applied to those fields.

“AudiNect: An Aid for the Autonomous Navigation of Visually Impaired People, Based On Virtual Interface” in International Journal of Human Computer Interaction (IJHCI) , Volume (4): Issue (1)